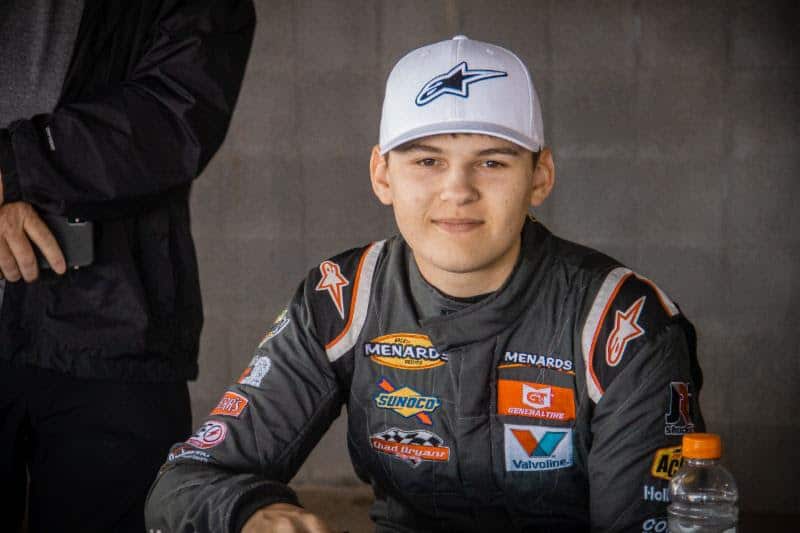 NASHVILLE, Tenn. – Soaking in the breathtaking 2.66-mile Talladega (Ala.) Superspeedway as a spectator for Chad Bryant Racing last week, ARCA Menards Series rookie Corey Heim is ready to climb back aboard his No. 22 Speedway Children’s Charities Ford Fusion for a little short track action at the Fairgrounds Speedway Nashville on Saturday night, May 4.

To help prepare Heim, 16, for his third career ARCA start, the Chad Bryant Racing team recently tested at the half-mile short track where Heim quickly caught up to speed and his race car responded to the aggressive changes throughout the session.

“I’m looking forward to Nashville,” offered Heim. “Paul (Andrews) and the Chad Bryant Racing team brought me a good Ford Fusion and we worked diligently on the handling of the car – especially as the track began to transition for day to night. I think we’ll be a lot faster when we unload for practice on Saturday.

“Nashville seems like it’s going to be a rhythm place when it comes to pace and I think tires conservation is going to be important, so hopefully we can make the right adjustments and we can inch ourselves closer to Victory Lane Saturday night.”

Aiming for his third top-five finish Saturday night, Heim, an accomplished short track racer has already earned the respect of his competition – but now the Marietta, Ga. native is ready to win and feels it’s only a matter of time before it happens.

“It’s been a good season so far,” added Heim. “Paul (Andrews), Chad (Bryant, owner) and my teammate Joe (Graf Jr.) have been embracing and eager to help in any way. I’ve been able to be competitive because of a lot of hard work and a little bit of luck.

“We’re going to Nashville with the same plan that we had at Five Flags and Salem and hope it pays off on Saturday night. I’d really like to get my hands on that guitar.”

Bryant says he’s been exceptionally satisfied with the effort of Heim and look forward to another weekend of stellar results.

“Everyone is putting a lot of effort into both teams at Chad Bryant Racing,” he said. “Corey has done a great job in his first two races this year and the results have shown that. He’s never been to Nashville before, but I think his prior experience there will be beneficial to him on Saturday night.

“I’m confident we’re going to the race track with two opportunities to win and hope we can bring home the checkered flag.”

Despite missing two ARCA Menards Series races this season, Heim occupies 11th in the championship standings with 16 races remaining in 2019.

The General Tire Music City 200 presented by Inspectra Thermal Solutions (200 laps | 119.2 miles) is the fifth of 20 races on the 2019 ARCA Menards Series schedule. Practice begins Sat., May 4 with an hour and a half session from 1:15 p.m. – 2:45 p.m. General Tire pole qualifying is set for later in the day at 4:15 p.m. The race in the 67th consecutive ARCA season is set to take the green flag later that night at 8:00 p.m. The event will be televised live on MAVTV, while ARCARacing.com will stream live timing and scoring throughout the entire weekend festivities. All times are local (CT).