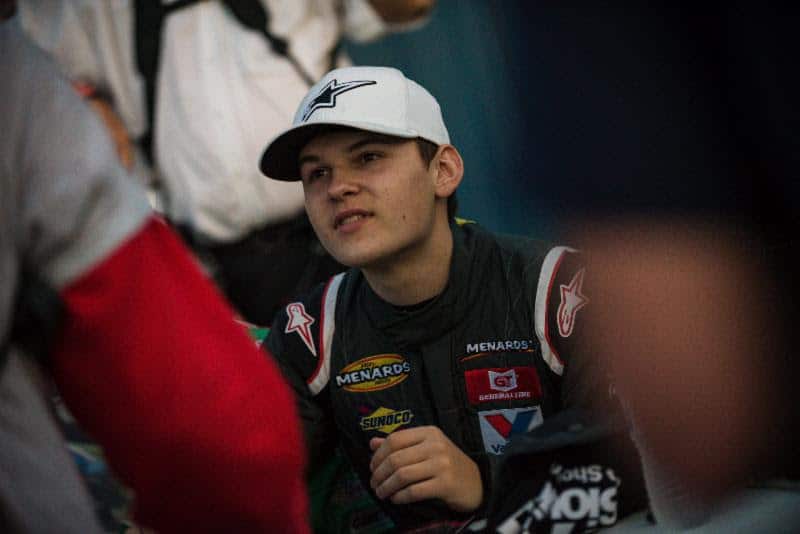 His next opportunity, in reality, steers him to Toledo Speedway site of Sunday afternoon’s Sioux Chief PowerPEX 200 presented by Federated Car Care.

And while the Marietta, Ga. native has never been to the half-mile speedway before his private test at the iconic Northern Ohio short track last Friday, you never would know based on Heim’s finesse and lap times in preparation for his fourth career start.

Testing alongside his Chad Bryant Racing (CBR) teammate Joe Graf Jr., Heim, 16, and crew chief Paul Andrews spent the majority of the day focused on race runs. All said and done, the teenage sensation is confident his No. 22 Speedway Children’s Charities Ford Fusion will be a contender in the sixth ARCA race of 2019.

“We threw a couple different things at the car all day and each adjustment seemed to make it better,” said Heim on the ARCA test. “It was a long, but successful day. I think we need a little bit more qualifying speed, but other than that we are in great shape.”

Heim heads to Toledo hoping to recover from an unfortunate circumstance at Fairgrounds Speedway Nashville earlier this month when his seatbelts became unlatched forcing Heim to pit under green and lose valuable laps to the leader. He returned to the race, seven laps down and finished 11th.

“Nashville was one of those freaky things,” added Heim. “It’s a bummer – because we had a decent day going. Not a good day, but we thought we were going to walk away with a top-10. Nothing we can do about what happened, we aren’t focused on the past, but instead concentrated on the future.”

Part of his future which includes running a majority of the ARCA schedule behind the wheel of the No. 22 Ford, Heim says he knows he needs a stellar run at Toledo to give him some momentum towards his next race at Madison International Speedway, nearly a month from now.

“Toledo was a fun experience,” added Heim. “The track has a ton of grip and has nearly no banking which suits my driving style well. I’m really happy with our No. 22 Speedway Children’s Charities Ford as well.

“Our long-run speed is definitely a strong suit and I’m confident we have one of the cars to beat for this Sunday’s race.”

“Toledo will be our fourth race together and we keep getting better,” said Andrews. “I thought we had better speed at Nashville than Pensacola or Salem. We tested this past Friday and I feel like we keep making significant gains on what Corey needs to win.

“Chad Bryant Racing loves going to Toledo. It’s a fast-flat half-mile track, that’s also exceptionally hard to pass. That seems to fit into Corey’s wheelhouse and (hopefully) we can get that first win. It will be a great day though when it happens Toledo or another race this season. I think we’re that close to winning.”

The Sioux Chief PowerPEX 200 presented by Federated Car Care (200 laps | 100 miles) is the sixth of 20 races on the 2019 ARCA Menards Series schedule. Practice begins Sat., May 18 with an hour and a half session from 12:30 p.m. – 2:00 p.m. General Tire pole qualifying is set for later in the day at 4:00 p.m. The race in the 67th consecutive ARCA season is set to take the green flag the following day, Sun., May 19 beginning at 2:00 p.m. The event will be televised live on MAVTV, while ARCARacing.com will stream live timing and scoring throughout the entire weekend festivities. All times are local (ET).