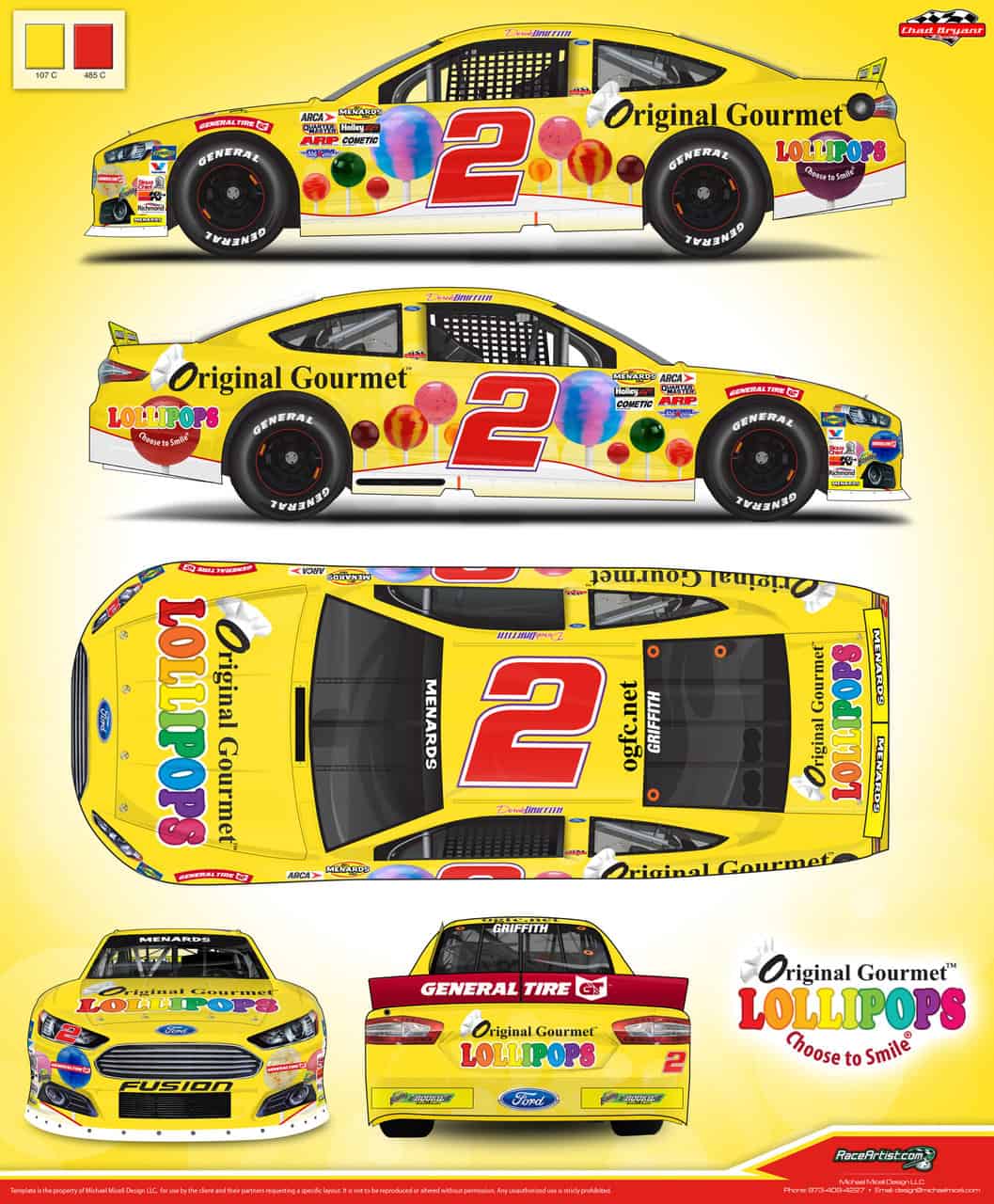 Griffith’s No. 2 Ford Fusion will be covered in a variety of the company’s 26 lollipops flavors.

Original Gourmet™ prides themselves on the wide variety of flavors they offer because they are a great treat for everyone in the family.

“I am so blessed for this opportunity to represent Original Gourmet™ Food Company and compete for the ARCA Menards Series East championship,“ said Griffith. “This is a great chance to bring a new partner into the sport and bring a product that race fans can enjoy while watching our Chad Bryant Racing compete for the championship title.

“I’m eager to get to Five Flags this weekend and finish what we started at New Smyrna (Fla.) Speedway.

Griffith, 23, returns to Chad Bryant Racing on the heels of an outstanding performance in their series’ debut together last month at New Smyrna (Fla.) Speedway.

The talented Late Model ace from the Northeast had one of the fastest cars in practice; won the pole, led a whopping 144 of the race’s 175 laps, but a late race pit stop penalty relegated Griffith to start at the rear of the field.   With 31 laps remaining he was able to come from last to second.

“It’s going to be a fun season,” added Griffith. “With the support of the Original Gourmet™ Food Company, we’ll not only have the opportunity to win races, but we will also contend for the series’ championship – something I didn’t think we’d be able to do. Hopefully with the strength of our team, we can put a ‘licking’ on the rest of the competition.”

Team owner Chad Bryant says he’s ecstatic to have Griffith apart of his team’s driver development program, and their performance at New Smyrna was just the start of things to come from the No. 2 Chad Bryant Racing team this season.

“Derek impressed a lot of people at New Smyrna and he’ll only continue to turn heads as the ARCA Menards Series East season marches on,” offered Bryant. “He is extremely talented and our performance last month is just a taste of what is to come from our No. 2 Chad Bryant Racing team.

“We’re happy to carry the Original Gourmet™ colors and look forward to celebrating with them a lot in 2020.”