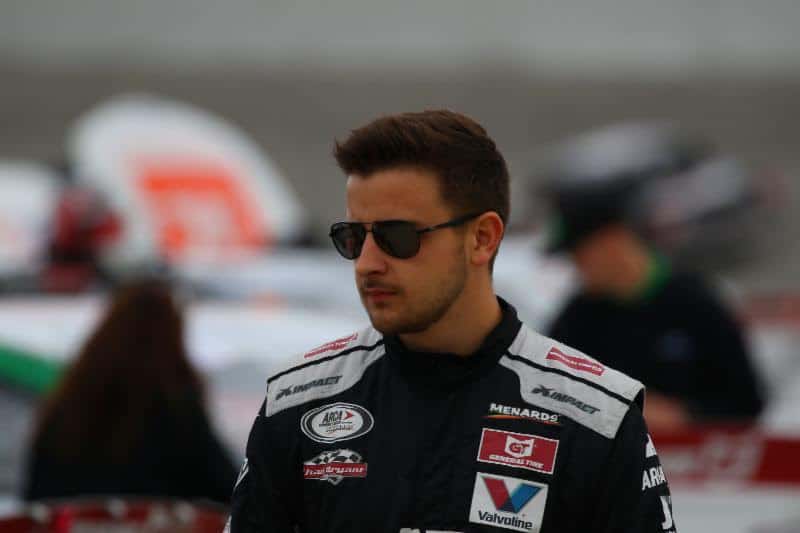 Inside the race car, Graf despite the injury left nothing on the table.

“I really enjoyed the Music City 200 last year,” said Graf who heads to Nashville seeking his third straight top-10 finish. “I learned a lot throughout the race, and we were in contention to battle for the win at the end of the race but unfortunately lost a transmission with under 20 laps to go.

“We had a very productive test on Monday, and I feel very confident going into Saturday’s race.”

Graf’s upbeat demeanor for the fifth race of the 2019 ARCA Menards Series season is contributed to a recent successful test with his No. 77 Chad Bryant Racing team alongside teammate Corey Heim which saw Graf’s turn fast laps negotiating both short and long runs.

Prepared to earn his second career ARCA victory this weekend, Graf feels his experience last year at Nashville will play into his hands not to mention the recent momentum of two top-10 finishes at Salem Speedway and last Friday’s superspeedway rumble at Talladega (Ala.) Superspeedway.

“We’re making some noise – we just need to shake off the bad luck we’ve been having,” added Graf. “We overheated at Daytona because of a plastic bag, got bitten on pit road at Salem and ran over some debris late in the race at Talladega and both of those scenarios I feel like cost us an opportunity for top-five finishes.

“We were able to recover though and made the best out of the situations. Because of the hard work of Chad (Bryant) and the guys – I feel prepared to go to Nashville and execute and do it well.”

For the fifth straight race, EAT SLEEP RACE, a racing lifestyle apparel company headquartered in New Jersey returns as the primary sponsor of Graf Jr.’s No. 77 Ford Fusion for the 200-lap race.

Talladega wasn’t big just because of EAT SLEEP RACE last week. On Friday, Richard Childress Racing announced that 20-year-old Graf would compete in a limited NASCAR Xfinity Series schedule this year – while also serving as the team’s marketing and communications intern through a partnership with Graf’s college, New York University.

“This is an amazing opportunity that wouldn’t be possible without NYU and RCR working together,” sounded Graf. “For my internship to be with one of the most recognizable teams in NASCAR is unbelievable. To then think that I will also have the opportunity to drive the No. 21 car is really exciting.”

“I am pumped for the opportunity to learn all facets of this business,” continued Graf Jr. “From inside the cockpit to the corporate office. The quality of the RCR organization speaks for itself, especially celebrating their 50th anniversary this season. I am eager to learn, contribute and compete.”

Graf’s crew chief and car owner Chad Bryant says Nashville is another opportunity for his young driver to find his niche and continue to build more confidence ahead of the summer stretch.

“Joe’s done a tremendous job the last few weeks,” added Bryant. “We’ve had much better race cars than the box score shows – but Joe hasn’t gotten discouraged and instead continued to drive his guts out in the race car.

“He showed a lot of speed at Nashville last year and during our test – so hopefully, we can go back there this weekend and capitalize on that with a top-five finish or a win on Saturday night.”
For more on Joe Graf Jr, please like him on Facebook (Joe Graf Jr.) and follow him on Twitter (@JoeGrafJr) and visit his brand new website at JoeGrafJr.com.

The General Tire Music City 200 presented by Inspectra Thermal Solutions (200 laps | 119.2 miles) is the fifth of 20 races on the 2019 ARCA Menards Series schedule. Practice begins Sat., May 4 with an hour and a half session from 1:15 p.m. – 2:45 p.m. General Tire pole qualifying is set for later in the day at 4:15 p.m. The race in the 67th consecutive ARCA season is set to take the green flag later that night at 8:00 p.m. The event will be televised live on MAVTV, while ARCARacing.com will stream live timing and scoring throughout the entire weekend festivities. All times are local (CT).