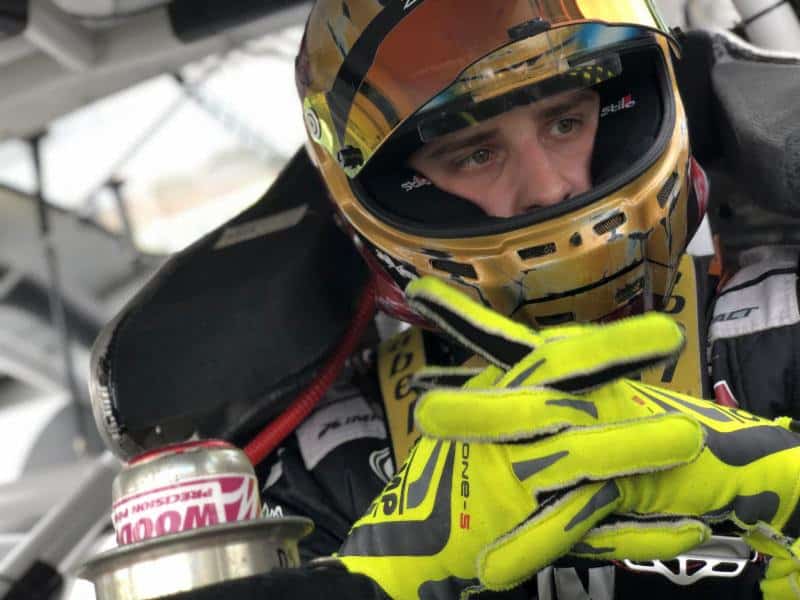 Sitting fourth in points and within reach of second place, Graf Jr. is ready to get down to business and in the spirit of his marketing EAT SLEEP RACE – the rising star is eager to “EAT SLEEP RACE SALEM” aboard his No. 77 Ford Fusion.

“Yeah, I’m pretty hungry to go out there and have a good run on Sunday,” offered Graf who will make his third ARCA start at Salem Speedway. “We had a pretty good test. Did a lot. Learned a lot and I think we should be in good shape on Sunday afternoon.”

“I was frustrated with 11th – because I felt like we were so close to top-10 runs both times,” recalled Graf. “Salem isn’t a walk in the park when it comes to a particular driving style. Its relatively rough surface demands a pretty physical race where you have to get up on the wheel and drive.

“I’m prepared to get up and drive my No. 77 EAT SLEEP RACE Ford Fusion to the front and stay there. We had a decent recovery at Five Flags – with an 11th (chuckles) – but I’m ready to get our Chad Bryant Racing team back inside the top-10 where we belong.”

For the third straight race, EAT SLEEP RACE, a racing lifestyle apparel company headquartered in New Jersey returns as the primary sponsor of Graf Jr.’s No. 77 Ford Fusion for the 200-lap race.

“Super pumped to have EAT SLEEP RACE back on board this weekend at Salem,” offered Graf Jr. “We are working with them on several different projects and they have been instrumental in making our social media campaign surrounding Daytona a success.

“I’m also really happy about my own clothing through EAT SLEEP RACE and look forward to seeing that thrust as the season goes on. A lot of good things going on for me both on and off the track.”
Graf’s crew chief and car owner Chad Bryant says Salem is the perfect opportunity for the No. 77 EAT SLEEP RACE team to get back on the throttle and gain some momentum ahead of the summer stretch.
“Joe has always done a good job at Salem in the past – but he’s determined to take that experience and use it to the fullest potential on Sunday,” said Bryant.

“He will be one of the most experienced drivers in the field and that should play into our hands. A win on Sunday would be huge for me, Joe, the guys and EAT SLEEP RACE.”

The Kentuckiana Ford Dealers 200 (200 laps | 111 miles) is the third of 20 races on the 2019 ARCA Menards Series schedule. Practice begins Sat., Apr. 13 with an hour and a half session from 11:00 a.m. – 12:30 p.m. General Tire pole qualifying is set for later in the day at 3:00 p.m. The race in the 67th consecutive ARCA season is set to take the green flag the following day, Sun., Apr. 14 beginning at 2:00 p.m. The event will be televised live on MAVTV, while ARCARacing.com will stream live timing and scoring throughout the entire weekend festivities. All times are local (ET).