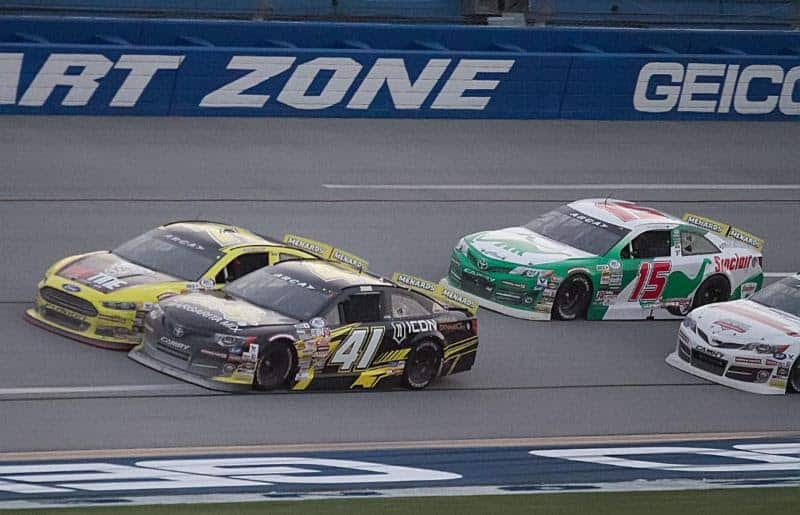 MOORESVILLE, N.C. — In less than two weeks, Joe Graf Jr. will be headed back to Talladega (Ala.) Superspeedway, a track that was the background for the closest finish in the 67-year history of the ARCA Menards Series.

The margin was so narrow it was a statistical dead heat, the margin of victory on the computerized scoring monitors showing 0.000 seconds. Only a video replay and the photo finish camera were able to determine Graf finished second by a matter of millimeters.

Q: It’s hard to believe it’s been a year since the most thrilling finish in ARCA history. Have you thought about the race in the last twelve months?

A: Not really to be honest. I moved past it and went on to the next race. Over the last twelve months lots of things have changed.. I am competing for a championship and at the time last year I had no idea I was going to run the rest of the 2018 season. The finish at Talladega opened opportunities for me and I’m grateful.

Q: Lets go back to the beginning. You didn’t even know that you were running at Talladega until three days before the race. What was the first thing you thought when you drove to the tunnel and saw the speedway?

A: It was the first time I was ever there. All I could think was how big and massive the place was. It was kind of surreal. Being one of my favorite tracks growing up added to the moment.

Q: From the moment you arrived until the first time you buckled into your Chad Bryant Racing race car what was going through your mind?

A: I was mentally preparing. Visualizing being on the track, going through all of the details I needed to comprehend. I spoke with my crew chief and my spotter to make sure I was ready to hit the track.

Q: The moment has arrived. You back out of your pit garage and start towards pit road. What’s going through your mind?

A: I was just thinking of what I needed to do when I get out there. For me, the adrenaline doesn’t begin until the race starts but there was definitely the WOW factor. I was thinking at the time I am a short track driver getting ready to race on a track that large.

Q: The official gives you the go ahead on pit road. You start to head out onto the 2.66-mile superspeedway. What does a driver do…go flat out, pace themselves?

A: Well you go through the gears and get up to speed and listen to your spotter about where to run and we try different things to make the car faster. It was exhilarating but once I was full speed my racing instincts took over.

Q: Take us through a lap at Talladega from a driver’s perspective.

What makes Talladega and a track like Daytona so different is this when you race a short track the g-forces move you to the right in the seat at Talladega with the banking it forces you down in the seat and that is something you really have to get used to. It’s the same in every turn.

A: We were just going to keep our nose clean and help me learn the draft since I had never felt it before. Once I was comfortable, we just hung in the back to miss the big wreck, which we fortunately did. With around five laps to go Riley Herbst and I were running something like 17 and 18th and we just took off to the front.

Q: It’s race time…you are on the pace lap with cars in front of you, cars behind you all preparing for 80 intense laps. Take us through the start.

A: Most important you have to make sure you get through the gears perfectly and wind it up to 7200 RPMs through every gear or you will just be slow and get run over. My adrenaline was pumping, and I just had to focus on staying clean as we got up to speed.

You’ve got to do your job and get up front and run good for your team and marketing partners. You can’t let your feelings distract you, if you do it can create a mistake.

Q: You ran a smart race. Your spotter Brian Cranmer was on top of the grandstand. What role does the spotter play at such a huge facility?

A: Definitely different from a smaller track. His job was to communicate with other spotters and teams to find drafting partners. He found Riley Herbst and that was a key to getting me to the front.

Q: People talk about the draft. Can you really feel that sensation?

A: It feels like you pick up speed, like you have more motor. Its nothing crazy unless you are in a big pack and the air moves you around and that gets a little sketchy. During the race Natalie Decker’s car shut off and she was six inches off my bumper, that was pretty intense. When cars wreck in front of you everything is happening at 200 miles per hour and you are definitely on the edge.

Q: So, there are five laps to go and you are running around 18th. You strike a deal with the 18 car of Riley Herbst. Then what?

A: It was time to go. We just hooked up and our cars worked together. It was really cool passing all those cars on the way to the front.

Q: Let’s jump ahead…it’s the second green-white flag and you are on the front row on the outside. You and Zane Smith are racing like there is no tomorrow and on top of the that you might run out of fuel, what are you thinking?

A: This is a big deal, a really huge opportunity. I was hoping I didn’t run out of fuel and going into turn three I doored him pretty good and thought we were going to wreck. But we weren’t done.

Q: Turn four: You and Zane (Smith) bump again. Are you running on adrenaline or is your mind crystal clear as to what you need to do?

A: A little bit of both. I was doing everything I could do to win. I was trying to get back out in front of him. I was on the outside…my heart was pumping pretty good.

Q: You head off Turn four nearly ¾ of a mile to the checkered flag, describe that moment.

A: I knew I was ahead coming off of turn four and it felt like an eternity to just make it to the tri-oval and the start finish line was even farther away.

A: I was just fighting. I was done thinking about fuel and it was all about what can I do to win.

Q: What was the first thing you did or said when you crossed the start finish line?

A: I yelled hell yeah…To this day I totally believe that I won.

Q: Brian (Crammer) came on the radio and said Zane (Smith) had won…what were your emotions?

Q: One year later what are your thoughts on the event and how much are you looking to get back to Talladega?

A: Not many people had heard of Joe Graf Jr. prior to that race. My Dad was at an event in Charlotte and he talked to Martin Truex Jr. about the race and Martin said oh yeah, your son ran a great race, so it’s kind of made people aware of who I was.

It will be so cool to be back there…I kind of feel that Talladega owes me one. Guess we’ll have to see what happens.