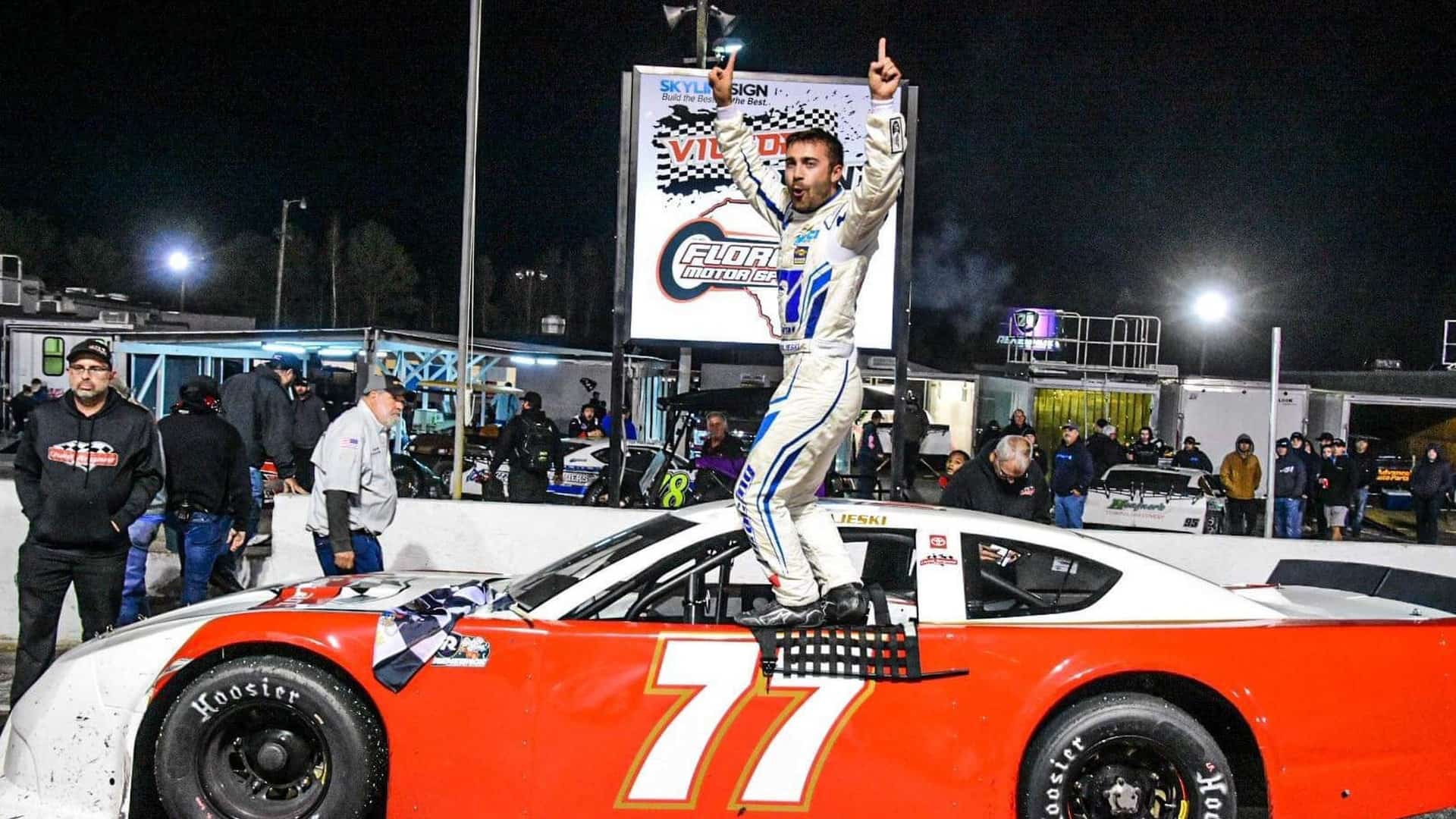 Just 24 hours earlier, Majeski and his Mooresville, N.C.-based team were spending a late night at the race track after engine problems hindered Majeski’s opportunity to turn laps in his No. 77 Chad Bryant Racing Toyota on Friday.

A resilient effort from the Chad Bryant Racing team and extra support from fellow Late Model team JR Motorsports saw the swap to a borrowed spec engine complete and Majeski set for a likely uphill battle.

Though Majeski, 25, qualified 14th on Saturday afternoon, the NASCAR Camping World Truck Series driver knew he would have 225 laps to get to the front.

At the drop of the green flag, the three-time ARCA Menards Series winner wasted no time muscling his way towards the top-10.

Less than 50 laps into the race, Majeski has hustled his way inside the top-five battling Berry, Timothy Peters, Lee Pulliam and Sam Yarbrough.

By Lap 75, Majeski had moved into second behind Berry and remained there through the Lap 100 race break.

Following a 15-minute break, Majeski and the CBR team worked on the handling of his No. 77 Chad Bryant Racing Toyota and despite falling to fifth on the restart, it was all part of the strategy.

Majeski patiently hovered inside the top-five while trying to conserve his tires for later in the race.

Despite battling a tight race car, team owner Chad Bryant gave his driver the OK to press the attack on tires and quickly, Majeski began making moves and climbed back to fourth by Lap 160.

By Lap 188, Majeski had moved around Yarbrough for second and set his sights on Berry for the lead. Two laps later, Majeski caught Berry and the two veterans Late Model drivers put on a classic clinic for the race lead – with the two-fighting racing hard but clean for the top spot.

With 25 laps to go, Majeski was able to clear the JR Motorsports champion Late Model driver and take the lead for the first time in the race.

By Lap 115, Majeski had distanced himself from Berry by half-a-second – a big enough gap that allowed the Seymour, Wisc. native to keep his challenger at bay and take the inaugural South Carolina 400 victory.

The victory was impressive by Majeski, touted as one of the best in a Super Late Model, but Saturday night was his debut in a Late Model Stock.

Despite his inexperience with the vehicle, Majeski quickly adjusted and continued his winning ways in an impressive fashion.

“Unbelievable win for all of us at Chad Bryant Racing,” said Majeski. “Proud of everyone involved. This was such a cool win for so many different reasons.”

He added in Victory Lane, “Man, this is unbelievable.  I worked these guys so hard this weekend.  I’m used to a Super Late Model, and they naturally drive better. We had two engine changes.  We tested a couple of weeks ago, and we were never happy with it at any point.

“It’s awesome.  I’m just really thankful Chad (Bryant) gave me this opportunity to run with his guys, Paul Andrews and everybody.  It’s a great group. He gave me a shot last year when my career appeared to be over and we won three ARCA races together.  He put me in this thing not knowing what would happen, and, man, unbelievable.”

Majeski also gave appreciation to Berry and his JR Motorsports team who stepped up to the plate to assist him and the Chad Bryant Racing team after losing two motors Friday.

“Also, I can’t say enough about Josh Berry and the JR Motorsports guys for lending an engine and helping us put it in last night,” added Majeski. “Class act people.”

Team owner Chad Bryant offered nothing but praises for his driver and team.

“I’m so proud of Ty (Majeski) and everyone on this Chad Bryant Racing team,” said Bryant. “Ty drove a flawless race and played the strategy perfectly and was able to beat the best of the best in his Late Model Stock debut with Chad Bryant Racing.

“We are so blessed to have a driver of his capabilities and talent behind the wheel. I also can’t thank Josh Berry and JR Motorsports team enough for their support in our time of need and I hope to repay the favor down the road if needed.”